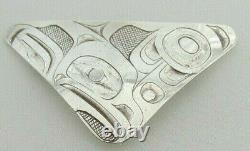 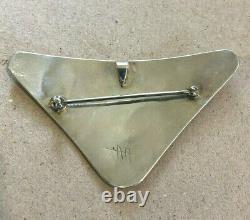 2"1/2 wide and 1"1/2 tall Pendant and Brooch combo. A symbol of power and prestige among many nations of the world, the eagle is also important to the natives of the Northwest Coast. Many myths and legends surround Eagle; eagle down, a symbol of peace and friendship, was, and still is, sprinkled before guests in welcome dances and on other ceremonial occasions; eagle feathers were used in rituals and worn on masks and headdresses. Eagle's beak is considerably shorter that that of Raven, and terminates in a.

Strong downward curve; the tongue is generally evident also, as are the U-form "ears" which convey the crest-like look of the bird's head. It would be easy to confuse the Eagle with Thunderbird, except that Eagle never has curled appendages extending from the top of its head, and its beak is not strongly recurved like Thunderbird's. Alvin Adkins is one of the foremost Northwest Coast artists.

His main focus is on producing jewelry of the highest quality. His craftsmanship and design skills are evident in each exquisite piece he creates. Alvin's crest figures include the Raven, Bear and Killerwhale. Adkins began to study the artform of the Northwest Coast Native peoples as a young man, under the guidance of Freda Diesing, one of the few women recognized on the Coast for her Art. Adkins has continued to immerse himself in the study and production of works in the Haida style.

He also creates silkscreen prints, which reflect his attention to detail and his superb and imaginative approach to design. In 2010, Alvin received a Creative Achievement Award for Aboriginal Art from the BC Government. The item "Haida Alvin Adkins Carved Pendant / Brooch Eagle Sterling Silver" is in sale since Tuesday, May 14, 2019. This item is in the category "Collectibles\Cultures & Ethnicities\Canada\ Aboriginal".